When Kevin Fennell joined 21c Museum Hotels in 2015, he was asked a simple question that stuck with him: What was your most memorable dining experience?

It’s the type of question that’s fun to sit down with, to start scrolling through the memories that we keep tucked away in our brains. As he took the stage at HotelSpaces, Fennell shared his. Having worked in Japan for a time, Fennell once visited the mountain town of Koyasan, the center of Shingon Buddhism. It’s there where he had his most memorable dining experience, he said, one that would go on to inform his own work today.

“The food and the lodging were not luxe; they were not extravagant. They were simple. They were stripped down. And the service was warm and deliberate and purposeful and thoughtful,” Fennell said. “The lodging at Koyasan is actually part of the temple, so it supports and reflects the community there; it reflects the community of monasteries. The food is created by the residents of those monasteries, so it nourishes both the residents as well as the guests, visitors, and pilgrims to the temples. And together, they reflect and support the communities that they’re in.”

What’s in a Name?

While he was Vice President of Design + Construction for 21c Museum Hotels, Kevin Fennell was part of an organization that carries much of that spirit into their own work. Based in Louisville, 21c Museum Hotels (part of the AccorHotels’ MGallery portfolio of boutique brands since 2018) currently has nine properties throughout the South and Midwest; their most recent location opened in Chicago in 2020, with new properties in Des Moines and St. Louis coming soon. Like Fennell’s experience in Japan, his company strives to create places that reflect and support the communities that they’re in, too.

A 21c Museum Hotel is just that: part museum and part hotel. The brand was started with the mission of making art more accessible. Indeed, not only are they open to hotel guests, but the art museum wings of their buildings are also free and open to the public at large. The art museums are open 24 hours a day, seven days a week, 365 days a year.

“At its core, 21c is interested in creating rich experiences and emotional connections with guests. It is a destination for locals and it supports and builds the communities that they are in,” Fennell said. “The museum is the area where we create resonance for our guests. It’s 21c’s form of hospitality. Art is around every turn and it’s a way to create conversations with guests and create memorable experiences.”

How they go about creating those memorable experiences — or making experiences “sticky,” as Fennell puts it — is accomplished in a number of ways.

First Fennell dove into 21c’s “pursuit of less.” A 21c Museum Hotel is purposely designed in “simple” ways, with the art often displayed in the manner of a traditional art museum. He references an idea from developmental psychology, where people can’t help assigning essence to objects. That’s why simple but striking penguin statues, painted in bold colors, can be found at each of their properties. There’s something about them, he said, that people are drawn to. They’re not flamboyant, yet people find them fun and engaging. 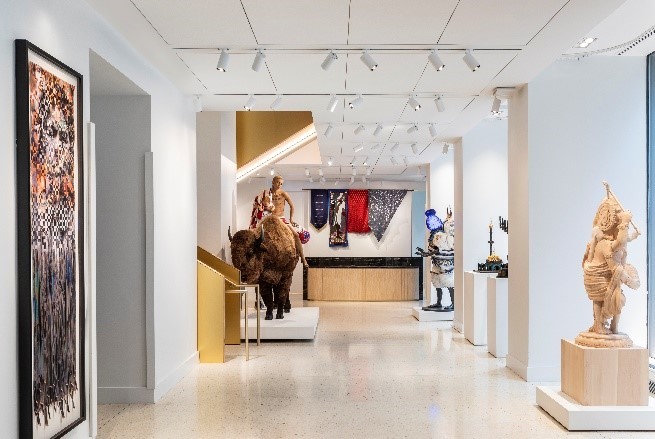 But simple, Fennell said, is not necessarily easy to do. Another strategy that 21c uses to stay sticky is their effort to “create tension.” They do this through their approach to architecture and design. Eight of the nine 21c properties are in historic buildings rich with architecture. 21c encourages their team to mine that history but not replicate it, creating tension in the ways they marry original historical elements of a building with modern design principles. That often means removing some of the building’s features — floors, walls, architectural flourishes — to open it up to new experiences.

“As designers, as creators, we often try to solve problems by adding to, by creating. But sometimes the best solution – not always, but sometimes –is to actually take away and to simplify,” Fennell said.

Fennell said that 21c aimed to incorporate art and architecture in a way that further connects guests to the city itself. He pointed to their hotel in Louisville that uses all sorts of design elements with a local nod, from the fixtures to the frames. Even the custom-designed wallpaper features the local flora and fauna.

Finally, for all the travelers that they host, 21c strives to be a destination for locals, too. They are, as he puts it, “globally engaged but locally rooted.” 21c hosts more than 2,500 local events each year that are free and open to the public. They arrange local artist talks, connect them with curators, and form partnerships with the local food and beverage industry.