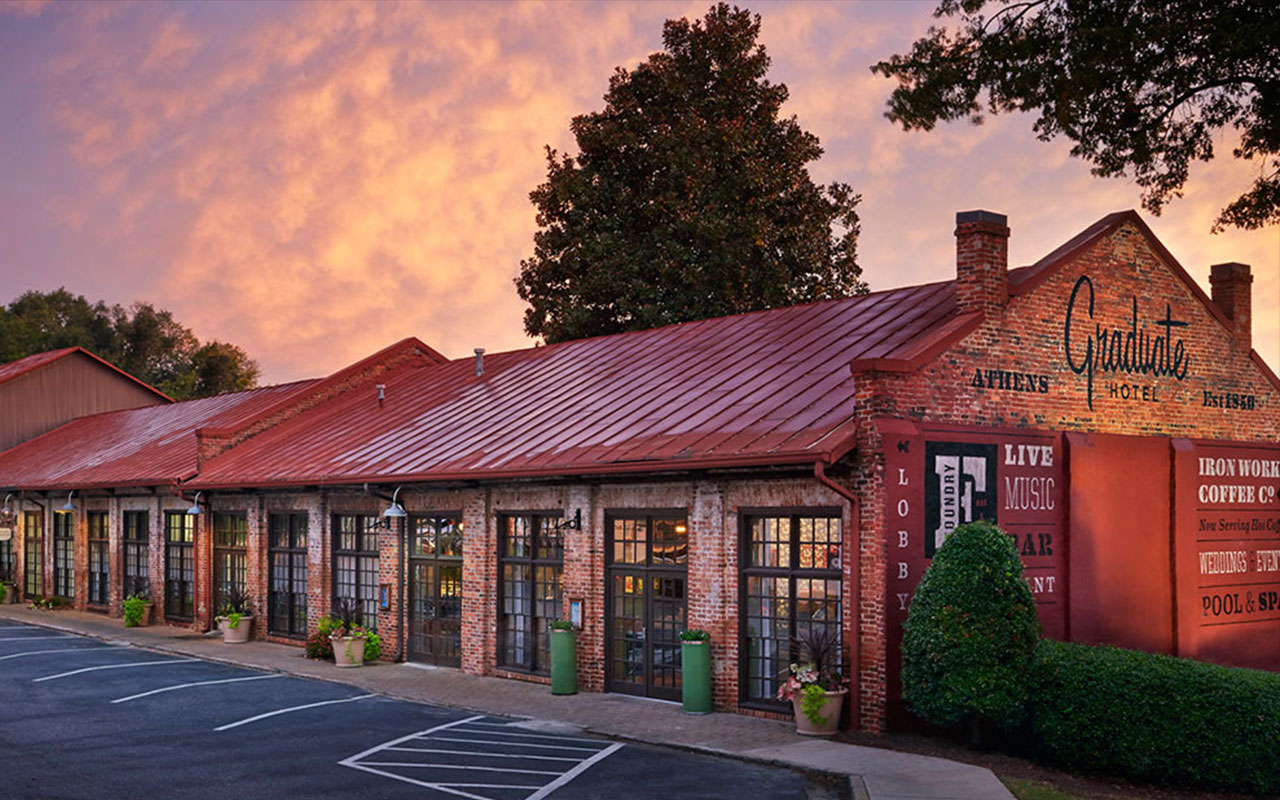 For decades, traveling to college towns meant staying at bland, substandard motels or older hotels that hadn’t been renovated in years.

For academics attending conferences, parents taking their teens on college tours, business travelers and others, this often meant ‘roughing it’ in accommodations they’d never consider in other circumstances.

Chicago-based AJ Capital Partners launched the Graduate Hotels brand in 2014. Graduate plans to have more than a dozen locations open by Christmas.

While Graduate’s growth has been measured, the Study brand is taking an even more deliberate approach to expansion. It opened The Study at Yale in New Haven, CT in 2008 and The Study at University City in Philadelphia, PA in 2017. A property at The University of Chicago will open in 2020.

We spoke with Graduate President Tim Franzen and Study’s Founder Paul McGowan about this growing market segment, industry trends and the ways in which they’re establishing guidelines for their brands while working to make each new property unique to its community and campus environment.

Franzen credits visionary Ben Weprin (AJ Capital Partners’ founder and CEO) with seeing an untapped opportunity. Going back about five years ago, Weprin was looking at new avenues for investment. Historically the company was focused on high-end resort properties.

Weprin identified an old Days Inn near Chicago’s Lincoln Park that had fallen into foreclosure, refurbished it, added a rooftop bar and called it Hotel Lincoln. The hotel became a hit and began attracting students, faculty and visiting families from nearby DePaul University, Franzen says.

An old Days Inn near Chicago’s Lincoln Park that got refurbished into Hotel Lincoln and became a hit.

“The success of the Hotel Lincoln sparked the idea,” he says. AJ Capital Partners began researching about 40 college markets nationwide, often consulting Smith Travel Research reports. They found a lot of “lackluster product,” including motels and hotel chains far from campus, in poor neighborhoods or near highways on the periphery of town. Hotels in good locations were often “mom-and-pop properties,” that hadn’t been updated in years.

“There were certainly no unique, fun properties.”

Another incentive—though university towns weren’t completely recession-proof, market fluctuations during down markets were “not as severe” as those in other locales. “It was nothing like the flux you see in city centers,” Franzen adds. “We decided this was an idea that had legs.”

McGowan and his company, Hospitality 3, own, develop, and operate all the Study Hotels, among other properties. His hospitality background includes 17 years with Marriott’s Starwood, developing the W brand.

The idea started to germinate in 2003 when he was visiting universities with his college-bound daughter. “I was intrigued that the accommodations available were not up to the standard I would want to stay in. Some of the options were less than desirable,” McGowan says. “I wondered, why can’t these universities that have upscale clientele support upmarket lodgings?”

Some markets couldn’t support a high-end property year-round – summers and the winter months were too slow. “But looking at the need I thought there might be a pent-up demand for this type of offering.”

McGowan wondered how he might softly brand this by starting in a new market like New Haven and then take to other markets if it had legs. Study was created around that thought.

“We wanted to tap into the richness of university life in a thoughtful, controlled way. Not kitschy,” he says.

Reflecting the name, Study Hotels are built around open environments with abundant workspace and lots of natural light. “A leather chair and ottoman is a signature piece, one that reflects our motto of ‘Read. Rest. Reflect,” McGowan says. “Our version of a suite includes a study nook.”

Study Hotels are built around open environments with abundant workspace and lots of natural light.

The aesthetic is “a clean, European sensibility, though not overly modern,” he stresses. “We want properties to feel inspiring, not stodgy.”

He adds, “Most Study guests are there for some sort of intellectual experience, whether it’s a conference, a visiting professor or dignitary or someone applying to grad school. We have an educated clientele that appreciates the experience.”

Its public spaces emphasize culture. In addition to popular bars, restaurants and lobby spaces, Study properties feature art curated by local museums. “We also rotate student work through our art galleries, to reinforce our connection to the university.”

To give each Graduate Hotel a unique, locally authentic aesthetic, the brand’s in-house design team starts from scratch, conducting research on the communities, the food and people.

“They spend time in town, on campus, in thrift stores and studying local fashion trends. There are definite differences across the country.”

Its first property – in Athens, GA., home to REM and the B-52s – is located in a former foundry that was later converted into a music venue and then a spa. Graduate Athens still boasts The Foundry, where it hosts frequent live music acts onsite, as well as the spa. The University of Arizona is known for its entomology department. So, in addition to a décor with Southwestern touches, the Graduate property in Tempe featured an enormous ant farm (no longer active) near the front desk as a conversation starter. 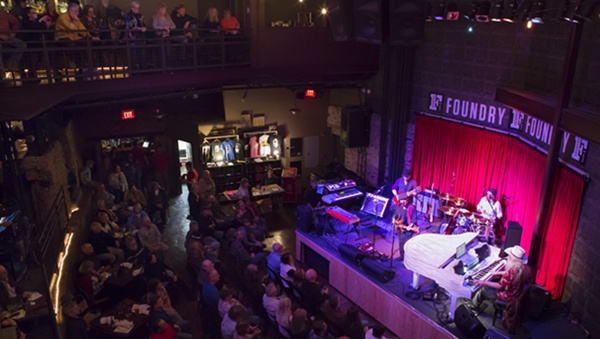 The Foundry at Graduate Athens.

With hotels opening this fall in Seattle and Bloomington, IN, Graduate will have 13 active properties by the end of the year. It plans to open seven more in 2019, which means it should have at least 20 hotels operating in 2020, Franzen says. ’In short order, we should have close to 40 hotels.”

This is substantial growth, but Graduate analyzes every market carefully before jumping in. “We’re not putting flags on the map just to put flags on the map,” Franzen says.

From big cities like Seattle to smaller “college” towns, the key is to find a location near “the center of gravity,” Franzen says. In many cases, that means next to campus. Graduate also makes it a priority to be close to other draws, including restaurants and shopping.

“In smaller towns, if you can walk to campus, that’s fantastic, but if we have to choose, in general we’d rather be downtown than close to a campus that’s further away,” he emphasizes.

Study Hotels prefers to be right on campus; currently, they have an active pipeline of proposals from colleges and universities looking to develop on-campus properties. “Our preference is always to be right there. We don’t want people to have to take a taxi or shuttle to the school,” McGowan says.  “It’s a high priority.”

Who is staying at these properties?

Franzen says up to 50% of their business is “university-related,” with guests that include parents visiting for the weekend or taking their high school student kids on college tours, as well as administrators, researchers, visiting professors and sports teams.

Another market: vendors looking to sell goods or services to the university, who often visit during the quiet summer months. 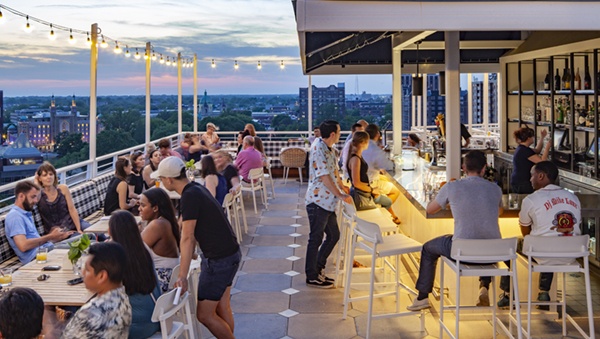 Graduate Hotels are designed to integrate into their communities, attracting students, faculty and staff but also locals.

However, Graduate Hotels are designed to integrate into their communities, restaurants, bars and coffee shops attracting students, faculty and staff, but also locals.

Franzen and McGowan emphasize the importance of their food and beverage programs to brand success. Both Study and Graduate thrive by becoming integral parts of the communities and by drawing locals to their restaurants, bars and coffee shops. Lobbies become draws for students and faculty.

Graduate’s Charlottesville, VA (Univ. of Virginia) location is across the street from a large medical center. “All the hospital staff love our coffee shop {Sheepdog Cafe} and make it a destination. They come for coffee before work and stop off for a cocktail when their shifts end,” Franzen says. 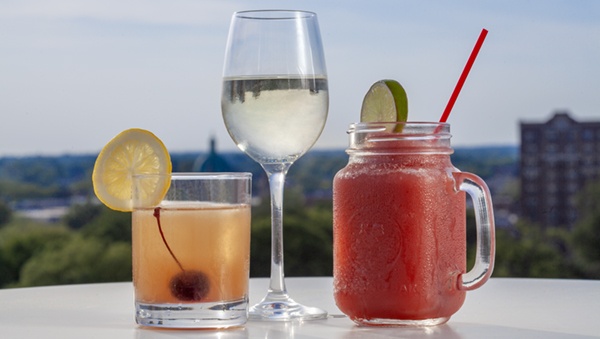 “Study has our own culinary team and our restaurants are places where people who live in the community are coming in for dinner and brunch,” says McGowan. “Bars and restaurants are key to us. We have a full-service operation."

Reflection of a Wider Trend

Hospitality has seen an explosion of niche hotels over the last decade, as travelers move away from homogenization to seek out properties with a “neighborhood feel” that reflect their personalities.

“Looking back at the history of hotels in America, at the dawn of the interstates, hotels and motels began popping up and everything was independent. You didn’t know what you would get until you pulled up at the front door,” Franzen says. “That lack of consistency led to the development of Holiday Inn, Howard Johnsons, and other chains. Most brands wanted things exactly the same everywhere with no surprises. The pendulum swung toward ‘normalcy.’”

However, over the past decade, with the evolution of the Internet, social media and services like TripAdvisor, it’s much easier to get a handle on local properties. Visitors will know whether a property has good service, clean rooms, and strong amenities.

“Through online reviews and photography, it's easier to be unique and different and still be a success,” Franzen says. 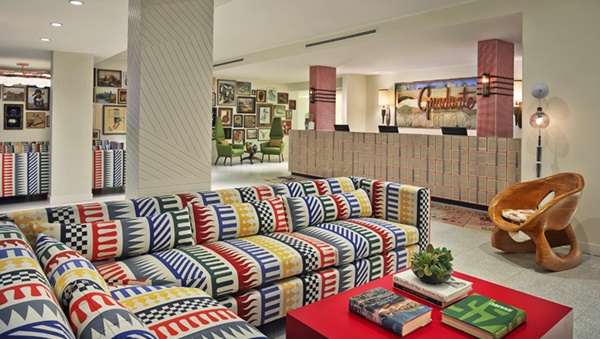 At Study and Graduate you will be surprised but not too surprised.

“We like our guests to be surprised, but not too surprised,” he adds.
“This reflects a broad trend across all demographics. We believe there is a broader trend in hospitality with U.S. hotels that speak to their local communities,” he says.

“We’re super excited about what we’ve created so far because we’re not beholden to brand standards. We’re free to do something different.”

Having opened The Study at Yale in 2008, five years before Graduate began, McGowan has a justifiable claim to having launched this collegiate trend. He believes his slower approach will lead to long-term success, with the Study brand still standing after other niche brands have faded.

“It’s a crowded field right now. You’ve seen an explosion of brands over the past 10 years,” he says.

“I fell upon something that I thought had promise and created something of interest. There have been brands that launched since Study Hotels was launched and even though our trajectory has been slower, we have stayed true to what we’ve tried to achieve in this space.”

Interested in learning about the latest trends in hotel development & design? Join us in Austin for HotelSpaces '19.