Getting Hotel Owners and Operators Aligned

There are a lot of considerations, and sometimes concessions, that have to be made when hotel owners and operators are trying to align their goals. This was the topic of discussion between Randy Gaines, Senior Vice President of Operations & New Project Development at Hilton Worldwide and John Travato, Managing Director at Waldorf Astoria Hotels & Resorts during HotelSpaces Key West.

"Brands are very forceful. They want to protect their brand, while operators think there's some crazy stuff going on," said Travato. "Everyone wants an ROI. I think it has to be data-driven: We take a lot of feedback from guests."

He used the example of their Key West property (where this discussion was held) to illustrate how brand expectations might not reflect guest behaviors or expectations in every instance. The Waldorf generally expects its properties to have a 24-hour fitness attendant, but in Key West, where people really weren't using the gym facilities at all, it was a waste of money. But bringing that up took a little bit of re-framing.

"Our guests have a certain level of expectation when they show up, and our commitment is to deliver that to them”

"You can't go to the brand and say [making this exception to your brand standard] is going to save money. They don't want to hear that," he said. "You have to say it's going to stretch service: 'Can someone else tidy up the gym [on their downtime]? Do you really need a person standing there [doing nothing]?' We have to make sure we’re making the right brand decisions and the owner is still getting their return."

"For those operating luxury properties like the Waldorf or Ritz-Carlton, there are brand pillars and there's a level of expectation behind the luxury," said Gaines. He uses an example in New York, where the Waldorf-Astoria is currently being renovated and part of that investment will include a multi-million dollar upgrade to the restaurant.

“If you're going to be luxury there's a minimum level of entry. Some of your investment may not always have a clear return, but it's necessary and something you need to strive for. Our guests have a certain level of expectation when they show up, and our commitment is to deliver that to them.” 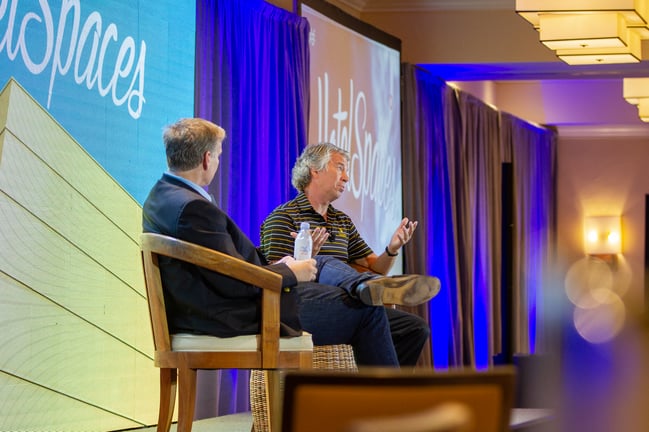 But sometimes owners and operators need to align on issues a little more serious than restaurants. When Hurricane Irma was coursing its path straight to the Florida Keys in 2017, the strength of owner support became very clear in how quickly and efficiently the hotel was able to respond.

"This hotel was one of the best prepared in the business," Gaines said proudly.

Travato explained that everyone in the Keys is very vigilant about hurricanes, and starting as early as May, hotel managers start attending preparedness courses.

"You have to be prepared because everything depends upon getting back up and running," he said. "If we prepare for the worst then we'll be better equipped."

They were fortunate in that the storm missed their property, but they still had a lot of damage from wind and rain. But because of their preparedness plan, they were able to get back onto the property two days after the storm with a leadership team—thanks to the enviable influence of Hilton Worldwide—and had the hotel back up and running in time for a wedding five weeks later.

"We can't control Mother Nature," Gaines said. "We've learned to get pre-approval with the insurance company to spend as we need to if that's $1 million on generators or whatever. What we've done for all these storms with all of our owners is tell them, 'Just get the generator. Spend the $250,000; you'll need it.'"

"If we prepare for the worst then we'll be better equipped"

Back in the Keys, the Waldorf was able to get about 80 percent of their workforce of roughly 250 people back to work within 10 days. Hilton, with their political and financial muscle, was able to get trucks with food and water down to the property, so they were able to feed their associates as well as their families, the police, firemen, National Guard, and locals. Theirs was the only kitchen open in the area and they were able to feed all of the people on the ground and provide emergency aid.

The Keys aren't the only area where Hilton has such emergency plans in place, either: in areas with higher political instability, they have helicopters on call and key relationships in place to ensure their properties get what they need.

But not every issue is on the magnitude of a massive natural disaster. For everything else the Hilton has an owner advisory council that is very involved in making decisions, whether it be for a panic button for housekeeping staff or switching over all parking to valet.

"The owners are very engaged and involved in what we're doing here," Travato said.

"We're conscious about not rolling something out if it won’t yield a return," Gaines explained. “Back in the old days that wasn't always the case, necessarily. We have to put our efforts toward thoughtful initiatives, testing them in our own assets and proofing them out. That way, we're doing all we can to yield a return"