The Advantages and Opportunities of Modular Construction

Is modular the future of building? Some certainly think so.

During a discussion on modular construction at HotelSpaces, Carl Hren (Senior Vice President of Architecture & Construction) and Steve Kohn (Director of Development) of Concord Hospitality and Danny Forster, Principal of Danny Forster & Architecture, shared their experiences with modular—the benefits as well as the difficulties, and the lessons learned along the way.

"Modular construction is picking up traction in the U.S., but it's been done in Europe for a long time," Hren said at the beginning of the discussion. "All of the rooms are built in a warehouse in Pennsylvania, shipped to the site, and stacked like Legos in place. We were able to get eight done per day, saving three months in the schedule."

100 Years Ago, Henry Ford Was on to Something

Much like Henry Ford once realized that automotive production was much faster and more efficient with an assembly line, so too is modular construction for buildings like hotels.

"You have the same level of quality from module to module throughout the hotel, and that's very hard to duplicate out in the field in the conventional style," Hren said. "It will take a while for developers to buy in, but [modular] will be the future of hotel building."

From start to finish, construction of the Louisville hotel took 364 days, and could have taken even less time than that if it weren't for some logistical constraints caused by the location of a parking garage. The cost of the modules was $50,000 per unit, and each was completely built out and furnished, right down to the mirrors and televisions. They just needed to be unwrapped and have the fire alarm hooked up, which was all done through the conventionally-built hallways.

Kohn noted that everyone involved in the design and build needs to be involved from day one. Forster agreed and said he was knee-deep in his project early on because as soon as the modules hit the site and start getting stacked, you can't make any changes at that point.

But It's Not as Easy as Stacking Legos

Forster's experience was a little different than Concord's. His building is using a steel frame and will be 25 stories tall, meaning the lowers modules are carrying much more weight than the upper ones, and the steel needs to be thicker to support the weight on the lower floors, then get more slender (in order to be economical) for the higher floors. But as the steel changes in thickness, tiny misalignments occur—so he needed different sets of drawings for every module.

"The plug-and-play mentality doesn't work for this," he said. "It's a tremendous amount of document tracking. It definitely requires extra vigilance."

Another issue, he pointed out, is that the industry just hasn't settled into modular construction yet, so questions around fee adjustment and standard construction time remain largely unknown.

"We're just trying to do this properly at first. There will be a reappraisal in time," he said.

Kohn noted that they knew what the project should cost with conventional construction, and even if it was going to be "cost-neutral" with modular they still picked up savings in time, as well as with labor.

"You never know what the labor market is going to be, and you get to control that risk a lot more with modular," he said.

For Modular to Work, Everyone Needs to be On Board

They all agreed that with modular construction, it takes a lot of courage on the part of the ownership group as well as an attitude of trust and support.

"If our management group held us accountable for every single mistake we made or we held the general contractor accountable for every single mistake, the whole project would collapse," Forster said. "We're all taking the attitude that this is a team and we have to carry each other through this. Until this becomes standard, you have to have participants with that attitude."

Kohn and Hren both emphasized how important it was to have the right team. For their project, they chose an architect and general contractor that didn't do modular but they had worked with many times previously and were trusted team players. Close owner and vendor involvement from the earlier phases also made a huge difference.

In the future, as they streamline the process some more, Hren says there is even more time to be saved. Forster agreed but noted that with wood framing there is a point where the project will flatline in terms of speed, but with steel there is still a lot more they can do to speed up construction time—like incorporating more modular units, such as modular elevators. And with steel framing, there is no limit on how high units can be stacked; it's all the same structurally as the Burj Khalifa, the tallest building in the world. (Though, he said, the amount of steel required on the bottom to support the top might cripple the economics of an exceptionally tall project.)

Hren and Kohn spoke about working with trades and getting the general contractor and subcontractors on board to understand the nature of the project. They need to understand that it's not a typical project and they only need about a third of the manpower they typically would, which translates into cost savings for them. They also see additional savings in getting the same fees that they would for conventional construction but being able to complete the job in less time. In addition to that, it's also safer. 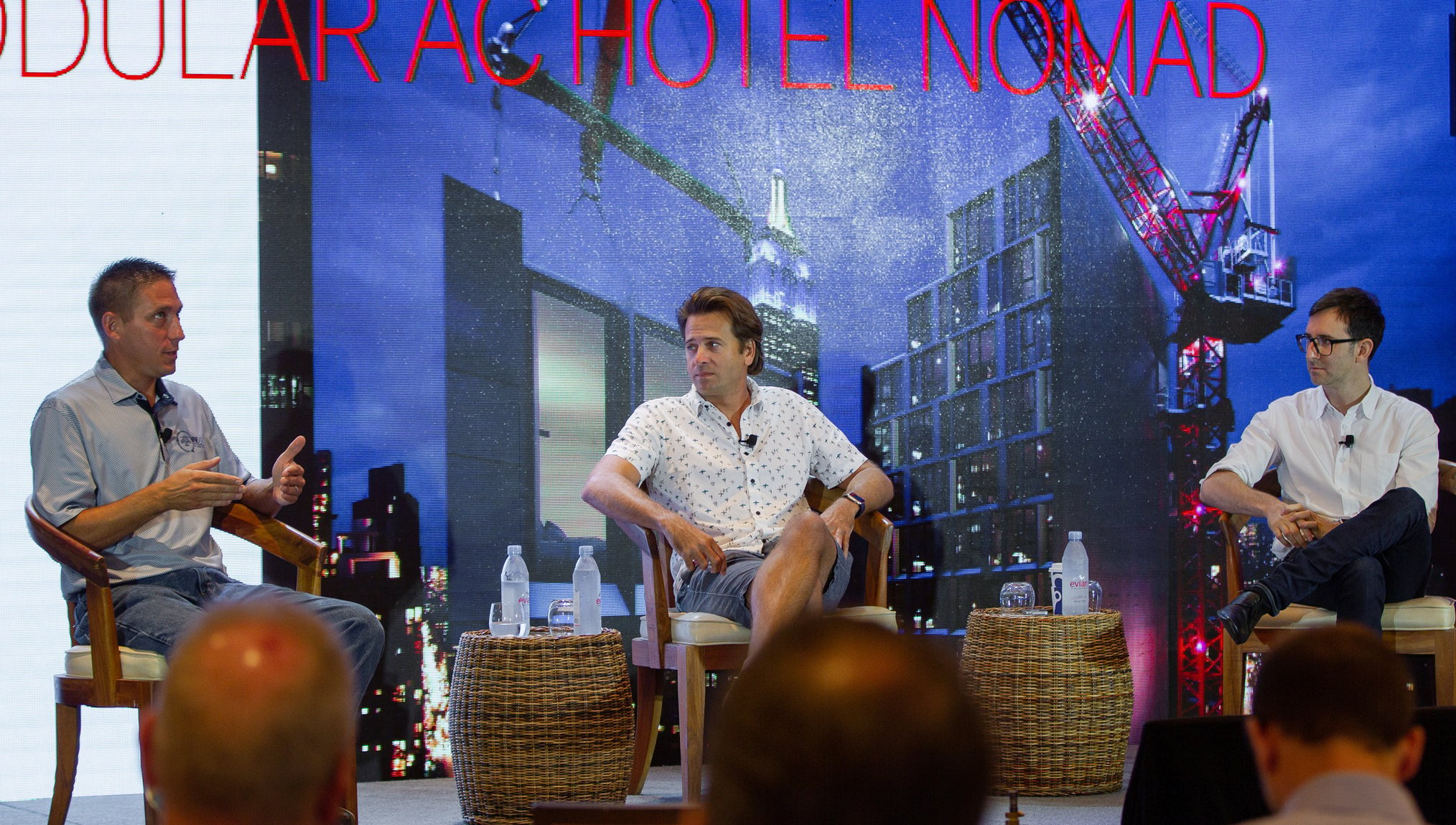 The Future of Modular

Forster mentioned there was some anxiety from labor unions in Pennsylvania "but it's a dialogue you need to have. It's a political conversation that's going to evolve as this evolves."

One problem they foresee is that, while modular becomes more popular, there will be those who immediately start trying to do it cheaper.

"I worry that once modular gets more popular some people will think they can just be an owner, hire a general contractor and architect, and turn away and think it's going to work," Hren said.

Kohn added, "We're invested in this. We think this is the way to go, so we don't want that to happen. We all know it just takes one really bad project for everyone to say 'modular doesn't work.'"

That, Forster concluded, is all the more reason why builders need to work with ownership groups who really believe in modular, like Marriott. He also sees a variety of construction applications beyond hotels: hospitals, senior housing, schools, offices, residential. Modular could end up being the future not just of hotel construction, but of all construction.